Arquus representative for Czech and Slovak markets in cooperation with VOP CZ, our industrial partner, prepared presentation of two vehicles from Arquus defense range for Czech Army and Ministry of Defence representatives. The event took place at Myslejovice reservoir, in the military area Březina.
The first vehicle, VAB MK3, in its 3rd and amphibious version, a 6×6 medium weight armored vehicle was behind the reason for choosing of the place for the presentation. The drivers presented its capabilities in water as well as in rough terrain. The legendary VAB, of which 5,000 were initially sold to more than 25 countries, remains after 40 years of service widely use. Its last 3rd generation benefits from experiences through VAB legacy and will ensure smooth transition to SCORPION program.
The second vehicle, SABRE, a 4×4 used by Special Forces is designed to operate quickly in extreme conditions. Everyone could experience its qualities in rough terrain.
A special guest to the event, Lieutenant-General Bertrand de La Chesnais, former French Army Deputy Chief of Staff (2014-2017) and a special advisor to Arquus President Emmanuel Levacher, shared his field experience with the vehicles.
For more than a century, Arquus have been the main supplier of French army vehicles. A long shared history has enabled the company to acquire solid experience of armed conflict and provide combat-proven vehicles and equipment. 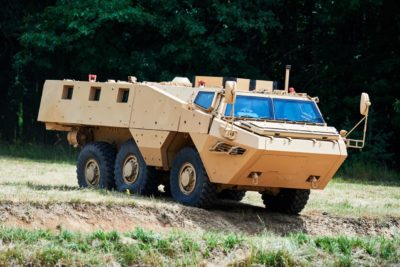 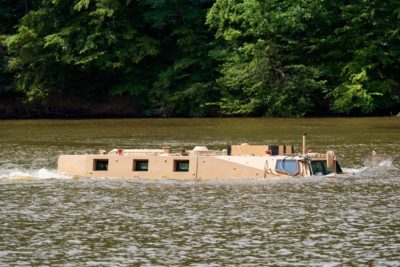